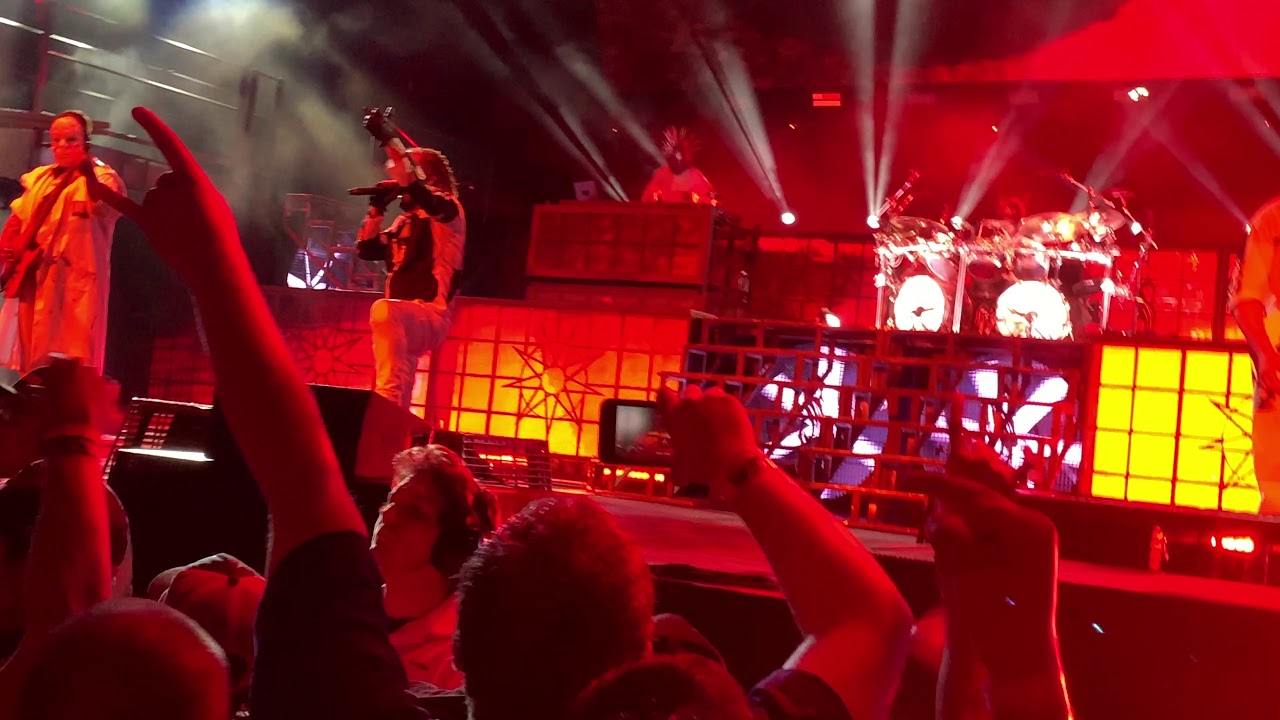 So the Knotfest Roadshow came through town last night. Intense would be applied here. It was hot. But maybe it was me. I was hungover and could not keep anything down. I wasn’t sure about attending this event given the oversaturation of concerts and lack of money I can piss away. That night I pissed whisky into the toilet that also seeped through my pores.

I arrived at 5:30pm and caught the first act, Behemoth. Such hardcore metal action! It made sweating like someone was going through your browser history was not so bad. After Behemoth was a band that has been on my list for years. Gojira! They did an excellent set of metal intensity and both bands gave the festival street cred considering the next band was Volbeat. “Metal they are not,” Yoda would say as he is passed around the pit.

I interviewed Michael Poulsen, the lead singer of Volbeat, years ago and my recorder ran out of space but I kept going and played it off (I’m sure I did not do that well). It upset me and made me feel stupid. I was more focused on having a good time. But despite my incompetence they are a straight ahead rock band that can and did pull off a great show for a Slipknot crowd. First two groups did about 30 to 35 minutes and Volbeat clocked in at approximately an hour. They knocked out tracks like “Still Counting,” “The Devil’s Bleeding Crown,” and “A Warrior’s Call” and the got the crowd ready for the carnage to follow. They are an honest rock band.

So Volbeat was finished and the place was packed. Now there is a curtain up. Oh shit.

I don’t feel sick anymore. I feel amazing. I hated the venue I was at. It’s too big, too far to walk to and a nightmare getting out. You have to leave early or you will be in the parking lot for hours playing bumper cars with drunk people who have nowhere to be. But I am loving it. I see a crowd of young and old. I see goths, freaks, metal heads, and normies. A crazy show will bring anyone together. This also marks 20 years since their debut album changed the rock scene… or should I say disfigured the rock scene. 1999 was the year their self titled album dropped. Also Y2K! What a year. But this continued success is not bad for a band who has been labeled as a gimmick. A newer version of Kiss. Yes they have new masks for this tour and I think it is awesome. Let’s fight to the death about it then have a drink.

So the curtain drops and it is insanity. They opened with an uplifting tune “People=Shit” and belted out their new track “Unsainted” and classics such as “Vermillion”, “Before I Forget”, “Psychosocial”, “Sic”, and “The Devil in I”. Corey Taylor spent time thanking their fans for keeping them alive. Taylor announced their new album, We Are Not Your Kind, has made to number 1 on the Billboard Charts. He acknowledged how hard it is in this day and age and especially for how his music is treated. My only issue is they only played two songs off their new album and their single “All out Life”, which is not featured on the LP but was released to promote the new music.

It was a circus from hell, but a hell that didn’t suck. The band’s sound has layers and I have noticed in the past that that sound gets jumbled at times depending on the venue and acoustics. They were tight along with a killer stage show with insane lights and pyro. It was great to see Slipknot still fill a huge venue after all these years and put out a hit album that critics are trying to have sex with. This show had the big names of the scene today and the authentic metal vibe. Slipknot has angry music but there was a lot of love there as well.