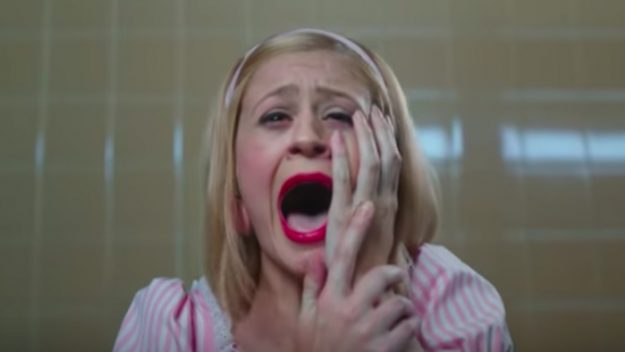 I went and saw a PG-13 horror film. First, I must say no horror film should be PG-13 but here we are. The film was Scary Stories to Tell in the Dark. If you grew up like me, then you are jaded but also you’ve probably read these books. Or at least aware of them. There were three volumes and these tales were not for kids yet there we were. The drawings alone made me cringe.

The movie takes place in 1968 during the Vietnam war. A group of teens break into a haunted house owned by a big name family from back in the day. They had an insane daughter who would read stories to kids through the wall of her basement room and then these kids would disappear. There is a twist that would make M. Knight proud.

The teens take the book because the female protagonist loves horror. This is the era of Night of the Dead. So cool. She has this book but the problem is that the book seems to be writing new stories in blood that stars the teenage heroes in this flick.

You have a story that is written called “Harold”. He is scarecrow that comes to life and gets revenge. He is for sure not from OZ. You have someone eating a toe then a corpse coming to get the toe and for some reason not being polite about it. There is a terrifying hospital scene as well as another horrific tale reimagined at a police station.

Guilleromo Del Toro wrote the screenplay and it is directed by Andre Ovredal. It also features Dean Norris from Breaking Bad.

They did not ruin the books or make them lame. It is not a kids movie but the studio targeted that crowd. They wanted the younger audience reach and didn’t want to worry about paying for expensive lobster meals for their dogs based on the nostalgia factor.

It has an 81 percent Google user rating, 80 percent on Rotten Tomatoes, and a 60 on Metacritic. It has made over 40 million dollars at the Box office with a production budget of $25 million.

Written By
Matt James
More from Matt James
Jack Black rose to prominence in the 2000’s as part...
Read More