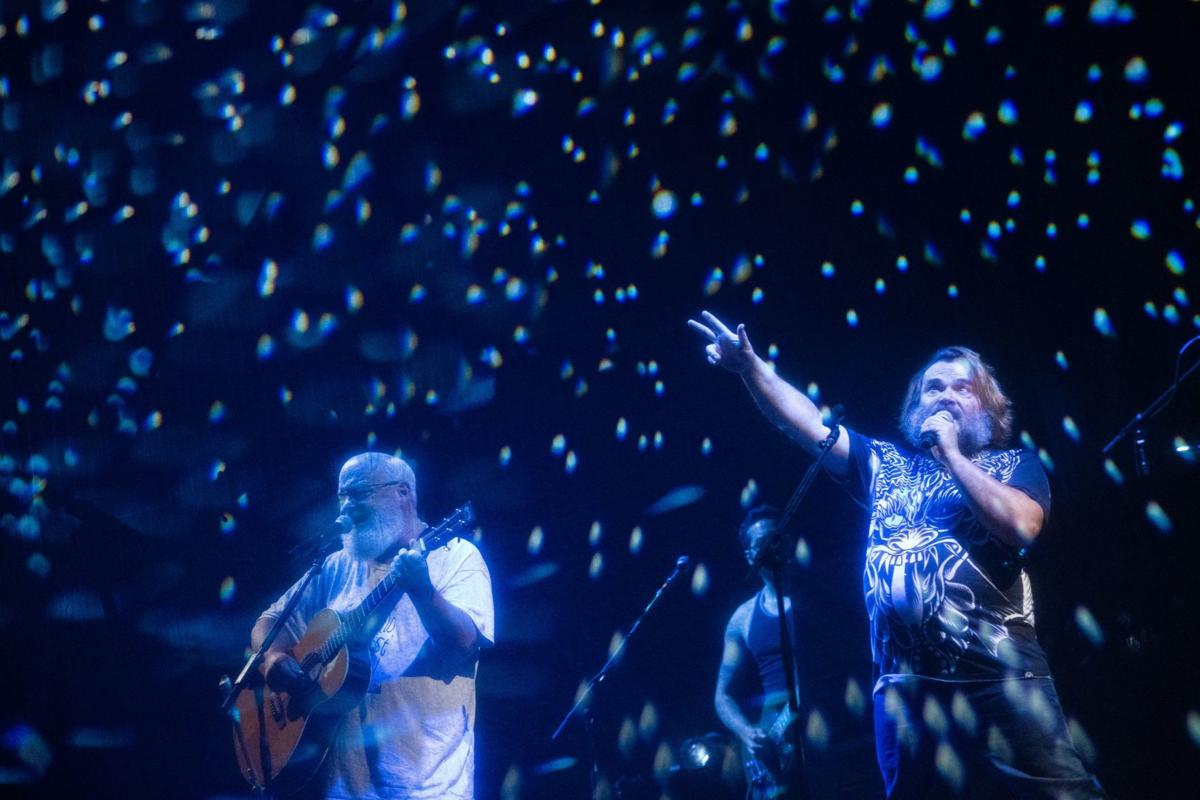 Jack Black rose to prominence in the 2000’s as part of the manchild comedy genre. You remember right? This obnoxious, immature, yet lovable man learns his lesson, defeats the bad guy, and gets the girl. Or is he?

With films like Shallow Hal, Saving Silverman, School of Rock and Tropic Thunder, Jack Black has dipped away from the Adam Sandler style of a career. He is very ambitious and has yet to phone it in whether you enjoy his on screen antics.

And Jumanji fans!!!! There is more to Jack Black. Tenacious! A homage to the rock gods of yesterday. Black along with cohort Kyle Gass bring you songs about sex, and dicks, the devil, and the metal lifestyle.

The first time saw them was years ago at a shitty radio festival where bands get thirty minutes to play and it is basically a greatest hits set. Hey more bands though right…even in that confinement and with those restrictions they were crowd favorites.

They just recently came to town on their Post Apocalypto Tour where of course the world ends. It is up to Jack Black and Kyle Gass to save the day. It was a cartoon musical released on youtube and the album was performed in its entirety. You had on a screen cartoon images of Black and Gass as they navigate through the end times with cavewomen, a huge vagina monster, a sexual terminator, a trip to outer space, Donald JR being guarded in the White House by the KKK and Nazi’s and getting a blowie from the sexual terminator (yes it was that kind of show). As each scene ended the duo would emerge behind the screen to play songs in order. Think Pink Floyd’s The Wall but with dick jokes.

After the rock opera was complete, the duo continues with their greatest hits sets getting the already drunk and rowdy crowd riled up to a fever pitch. The thing you might be wondering is why are people taking this so seriously? Because they are a great fucking band! They have great songs. They show us what rock should be. Fun! Jack Black sounds great behind the mic and his counter – part Kyle turns the act from a silly dick and fart joke song fest to a legit and quality rock show. Black even commented on how they won a grammy in 2016 and playfully mocked Slipknot and Mastodon who were in the running.

What is best about Tenacious D is the rock is done right. It is fun songs that kick ass that make you feel good and laugh. Metal has something that most genres don’t and that is the fanboy aspect. Every metal show I’ve been to there is always talk of when someone saw first Tool or Metallica. You see people getting their merch signed. There is a love that is similar to Star Trek and comic books. The genre’s mainstream appeal may be lacking and new innovative bands may be scarce (or at least not promoted) but Tenacious D shows what rock should be which is a good fucking time. Black and Gases are not only fanboys, they are the real thing. Tenacious D is their stoned love letter to a genre that raised a generation. Maybe more of a message carved in a bathroom stall.